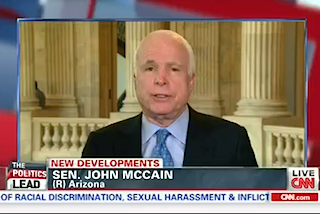 As the debate over the release of Bowe Bergdahl unfolds, all eyes have been on Sen. John McCain (R-AZ), who, like Bergdahl, spent five years as a prisoner of war, only in Vietnam instead of Afghanistan. McCain’s initial statements about Bergdahl’s release were not as critical as some of his Republican colleagues, but he has since come out more strongly against the decision to release five Taliban detainees in exchange.

On Tuesday, CNN’s Jake Tapper highlighted the change in McCain’s position from back in February when he appeared more open to a prisoner exchange for Bergdahl’s freedom to now when he is saying it was the wrong thing to do.

“This decision to bring Sgt. Bergdahl home — and we applaud that he is home — is ill-founded. It is a mistake,” McCain said during a press conference Tuesday. “And it is putting the lives of American servicemen and women at risk and that, to me, is unacceptable to the American people.”

“Senator McCain in February sounded very different when asked by Anderson Cooper about a deal very much like this,” Tapper said, before airing that earlier clip.

Asked by Cooper if he would support a prisoner exchange, McCain answered, “I would support — obviously I would have to know the details, but I would support ways of bringing him home and if exchange was one of them I think it’s something that we should seriously consider.”

Now that it’s done, McCain evidently thinks it was the wrong thing to do.