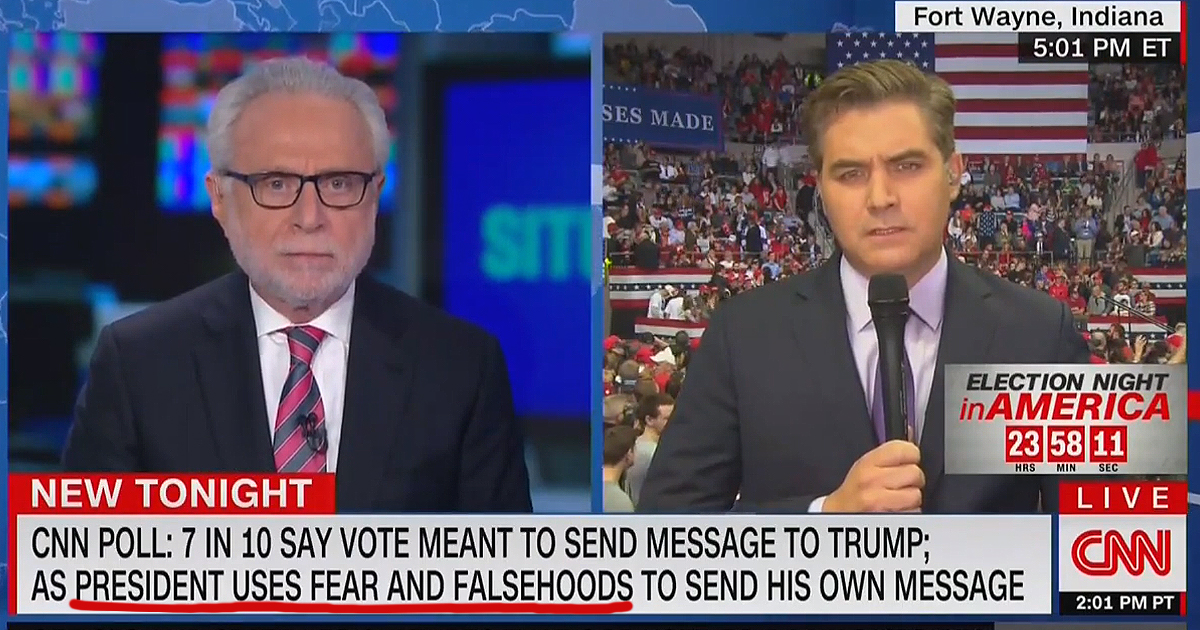 CNN is frequently criticized from the right, and particularly by the president, over their reporting on his presidency and about him personally. In particular, reporter Jim Acosta has been a loud and avowed anti-Trump voice, and has taken a great deal of heat for it.

One might expect that would lead to his being especially sensitive to things that might reinforce the specter of bias hanging over his head. But one would not be correct, as the chyron above shows.

That’s from CNN on Tuesday, as Acosta reported from the site of Monday’s Trump rally during Wolf Blitzer‘s show. It says in part, “President Trump uses fear and falsehoods to send his own message.”

No doubt most of the liberal media would here object that this is merely a fact, without bias or partisan interpretation, and that it’s no secret even among Republicans. But that would be wrong. One man’s “uses fear” is another man’s “cautions” or “warns”, like it or not.

But you don’t have to rely on the chyron to detect the disapproval obviously being voiced — something for which CNN has become a bit famous under Trump — you can also watch the report that was delivered over it.

That is almost breathtaking in how deliberately partisan it is. There is no hint of “democrats say” or “some analysts diagnose” or “this fortune cookie told me”, it is instead merely presented as a factual piece of news that he is using “inflammatory rhetoric” and that he is “divisive”.

Acosta characterizes the president’s criticisms of other as “jabs below the belt” and says “Voters have grown weary” but that Trump has “brushed them off.” That is opinion-analysis, very pointed, and unqualified.

Divisive, like “uses fear,” is inherently a judgment call. Was Barack Obama divisive? Certainly a segment of the population was vehemently opposed to his administration and specifically to the ACA. Would Acosta call that “divisive”? Or would he simply say people were “divided”? Or even more likely, would he claim the opposition was “divisive” for not acquiescing?

“Uses fear”, “divisive”, “brushes off”, “below the belt”… these are by their nature terms and phrases assessing and deciding. And while analysis is not automatically something to dismiss as biased or untrustworthy — in fact most Americans seek analysis and use it to make decisions — it’s not, strictly speaking, mere factual reporting either. Taken together, it’s very hard not to see that clip and that chyron as anti-Trump and by extension (since he is not on the ballot but Congress is), anti-GOP.

Which is exactly what the GOP has been saying about the network all along. But then again, Wolf didn’t go on stage at an Obama rally. Which is now a standard of conduct against which one must weigh their news sources. A sorry state of affairs indeed.

Watch the clip above, courtesy of CNN.