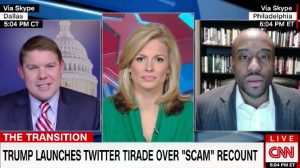 Discussing the recount occurring in Wisconsin and potential ones in Michigan and Pennsylvania, along with President-elect Donald Trump’s Twitter freakout to the news, Ferguson first remarked that it would probably be a good idea for Trump to go and delete his recent tweets. He also noted that there is no evidence that millions illegally voted in the election, like Trump claimed when saying he would have won the national popular vote.

Considering that Trump may have made the very case for a recount with his recent tweets, Ferguson said that Hill would agree with him that any recounts would be “meaningless and that it would be a “waste of resources.”

Hill responded that it isn’t about seeing if we will get another president but that if everyone’s votes counted. He also brought up the fact that there have been numerous recounts in elections before, and even if it doesn’t impact the overall results, with three contested states, one state may switch its electoral votes.

An amused Fergsuon wondered if Hill was saying that he’d propose moving everytime his state didn’t vote the way he wanted.

“Are you going to move every time you don’t get your way, Marc,” Ferguson asked. “That would be exhausting if that’s how you decided where you’re going to live based on where the election went last time.”

Ferguson further noted that he stayed in America for eight years despite Barack Obama being President of the United States.