CNN Concludes That Mitt Romney Is Entitled To His Own Facts 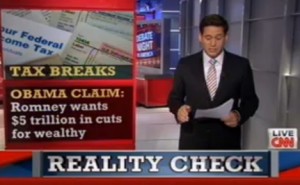 The big takeaway from Wednesday night’s debate is that, to the news media, and consequently, the public, the truth just doesn’t matter any more. Former Massachusetts Gov. Mitt Romney has been crowned the victor despite resting that victory on a pie of egregious lies. Adding insult to the injury of a moderator who refused to check Romney’s lies in real time is the absolute dereliction of post-debate “fact-checkers,” best exemplified by CNN’s ruling that one of President Obama’s claims was “false,” but only “if you take (Mitt Romney) at his word.”

During the debate, moderator Jim Lehrer completely abdicated his role at the most fundamental level. When Gov. Romney claimed that his tax plan didn’t include a $5 trillion tax cut (by virtue of a 20% cut in tax rates), President Obama repeatedly pointed out to the audience, and to moderator Jim Lehrer, that this was a fundamentally invalid statement, that whatever Romney’s promises to offset the cut, the cut itself does exist, and it reduces existing revenue by $5 trillion. Lehrer should have stopped Romney and asked him to clarify, to explain how much revenue Romney thinks would need to be replaced in order to enact such a rate cut.

Instead, Romney simply got to repeat the ostensible claim that cutting rates by 20% actually wouldn’t cost $5 trillion, thereby relieving him of the burden of explaining how to pay for it. What he actually said was “I’m not looking for a $5 trillion tax cut. What I’ve said is I won’t put in place a tax cut that adds to the deficit,” jumping completely over the middle of the equation, where you explain how the 20% rate cut doesn’t add to the deficit. It’s a logical fallacy that says that if cutting tax rates by 20% can be offset by eliminating loopholes and deductions, then it’s not a $5 trillion tax cut, so you don’t have to explain how to offset it by eliminating loopholes and deductions.

That Lehrer fell for this is bad enough, but even after the debate, in the cold light of day, every other fact-checker fell for it, to some degree, but none worse than CNN’s John Berman and Tom Foreman. Along with fact-checkers from FactCheck.org to WaPo’s Glenn Kessler, CNN’s fact-checkers misrepresented what President Obama said at the debate, accusing him of making the sole claim that Mitt Romney wants to cut taxes by $5 trillion, without mentioning the offsets that Romney promises. In case they missed it, here’s what the President said: (emphasis mine)

Governor Romney’s central economic plan calls for a $5 trillion tax cut, on top of the extension of the Bush tax cuts, so that’s another $2 trillion, and $2 trillion in additional military spending that the military hasn’t asked for. That’s $8 trillion. How we pay for that, reduce the deficit and make the investments that we need to make without dumping those costs on the middle-class Americans I think is one of the central questions of this campaign.

…Now, Governor Romney’s proposal that he has been promoting for 18 months calls for a $5 trillion tax cut on top of $2 trillion of additional spending for our military. And he is saying that he is going to pay for it by closing loopholes and deductions. The problem is that he’s been asked a — over a hundred times how you would close those deductions and loopholes and he hasn’t been able to identify them.

…When you add up all the loopholes and deductions that upper income individuals can — are currently taking advantage of — if you take those all away — you don’t come close to paying for $5 trillion in tax cuts and $2 trillion in additional military spending. And that’s why independent studies looking at this said the only way to meet Governor Romney’s pledge of not reducing the deficit — or — or — or not adding to the deficit, is by burdening middle-class families.

So, to be clear, the President happily stipulated that Romney’s tax cut of $5 trillion dollars carries with it a promise that it will be offset. All of the fact-checkers got this wrong, but CNN did it with style. After the debate Wednesday night, John Berman set about fact-checking the claim that President Obama didn’t actually make, and even though he, like every other fact-checker, points out that Mitt Romney hasn’t even tried to specifically explain how that cut will be offset, delivered this incredible ruling: “Romney said he would offset that by closing loopholes and reducing reductions. If you take him at his word, our verdict, Mitt Romney would cut taxes by $5 trillion, the verdict here is false.”

“If you take him at his word.”

Thursday morning, CNN’s Tom Foreman repeated this segment almost word-for-word, but wisely omitted that phrase.  He also more pointedly misrepresented what President Obama said, explaining that “What the president is assuming, the reason we said false on his claim, he basically is assuming if he just did a tax cut and nothing else, then it would include this giant amount of tax breaks for people out there.” (FactCheck.org tells the same distortion: “Obama accused Romney of proposing a $5 trillion tax cut. Not true. Romney proposes to offset his rate cuts and promises he won’t add to the deficit.”) As you can see above, the President never disconnected the tax cut from the promised offset.

I rate that statement, and the notion that “trust me” constitutes a “fact,” a five-alarm, 76-Pinocchio, pants-on-fire, please-look-for-other work lie.

Here are both segments, via CNN: