CNN Confirms: Nothing Newsworthy About Fox News’ News Of The World Coverage 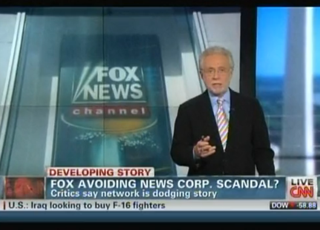 When the News of the World phone hacking scandal broke, many media outlets began to rightfully question how many of the paper’s sister media outlets under News Corporation and News International would handle its demise. On tonight’s Situation Room, Wolf Blitzer‘s chyron asked the question, “Fox Avoiding News Scandal?” but, aside from one jokey exchange during a commercial break on Fox News Watch, News Corp didn’t give it much to work with.

Reporter Brian Todd noted that Fox News in general had covered the scandal, though not as much as other cable news networks, but their staple media show, Fox News Watch had not. In fact, Todd played the one clip that appeared to have been referencing the scandal (it was later confirmed it was), a discussion during commercial break where Cal Thomas asked the panel whether they wanted “to bring up the subject we’re not talking about today.” No one wanted to bring it up. It is worth noting that Fox News Watch uploads noteworthy commercial breaks onto FoxNews.com so viewers can catch the internal dialogue, even though not technically a part of the broadcast. They chose to upload this clip to the site.

Todd also notes that the last mention on Fox News Watch of the News of the World was in 2006, but that Fox had covered the paper otherwise, and that both the Wall Street Journal and The Times in the UK were covering the story, as well as Sky News. Todd also asked whether CNN and company were “overcovering” it, though only rhetorically. Ultimately, the evidence of bias on Fox News’ part somehow landed squarely on the shoulders of its weekly casual chat show.

There are many legitimate questions to be raised about the way news entities for whom the News of the World was a sister publication should and is covering the scandal, but this report doesn’t raise too many. Using Fox News Watch, a Saturday afternoon grab-bag talk show, to evaluate how the network has covered the scandal doesn’t quite make sense, even if it is the one show on the network that describes itself explicitly as a media show. CNN did not evaluate its own coverage of the scandal by counting how many mentions the News of the World has gotten recently on Reliable Sources, but by the whole network’s output. And the fact that Todd goes out of his way to emphasize that Fox has covered the scandal, Sky News has done so even more, and that both the Wall Street Journal and the The Times are covering it do take away from the “much ado about nothing” feel to the piece.