CNN Contributor On Suicide Bombers: ‘You’ve Got To Hold These Bad Guys With The Respect That They Deserve’
video

CNN Contributor On Suicide Bombers: ‘You’ve Got To Hold These Bad Guys With The Respect That They Deserve’ 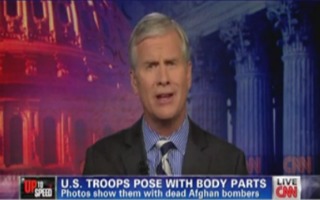 Appearing on CNN, Retired U.S. Army Major General James “Spider” Marks was asked to weigh in on the unfolding scandal surrounding photographs, recently published by the L.A. Times, which show coalition soldiers posing with the mangled corpses of suicide bombers in Afghanistan. Marks said that he believes that the soldiers made a “terrible mistake” and that “you’ve got to hold these bad guys with the respect that they deserve.” But it is the military’s rules of engagement in Afghanistan that is the “terrible mistake” and it is the public hand-wringing when events like these surface that provide propaganda victories to America’s enemies and prolong U.S. involvement in its longest war.

In this clip, CNN recaps what is shaping up to become a watershed year in U.S.-Afghan relations. First, in January, photographs surfaced that showed uniformed American military personnel urinating on the corpses of Taliban fighters. In February, American-Afghan relations sunk to a new low when it was leaked that military prison officials burned Korans that were being used to pass messages between interned combatants. In March, a rogue U.S. soldier slaughtered women and children in an alcohol-fueled rampage. Finally, this most recent scandal involving troops posing with the bodies of suicide bombers has further soured relations with the Afghan people.

Marks says that this, in conjunction with previous incidents, is highly damaging. He says that the soldiers in question were tasked with performing a forensic test on the deceased combatants in order to attempt to identify them. “Sadly, what you had is you had these soldiers, ostensibly, dehumanizing an enemy. That can’t be done. You’ve got to hold these bad guys with the respect that they deserve,” said Marks.

Marks made clear that “99 percent” of the military do not behave in ways he deems disrespectful to enemy combatants, but that the military must engage in some “damage control” in order to reduce the possible backlash.

Marks’ analysis is indicative of the culture of warfighting that reigns in Washington and has informed the defining of the rules of engagement in foreign theaters for more than a generation. But it is that effort to sanitize military conflict that arguably prolongs it.

This doctrine, espoused by Marks but also by many in the civilian leadership, presupposes the indigenous populace in a theater of operations will be offended by an aggressive military engaged in pacifying an insurgency than a lightly armed force that is most concerned for civilian sensibilities than warfighting. Some would argue that it is the heavy footprint that provokes an insurgency – but the ROE has been hamstrung by political correctness for the better part of America’s 11-year involvement in Afghanistan and the insurgency persists.

The following statement will shock those that have never had a candid conversation with a solider before, but will be obvious to those that have: The rules of engagement are hampering soldiers from doing their jobs in Afghanistan.

In 2009, The Washington Times ran a expose on the latest ROE. Some of those new rules included:

• No night or surprise searches.
• Villagers have to be warned prior to searches.
• Afghan National Army or Afghan National Police must accompany U.S. units on searches.
• U.S. soldiers may not fire at the enemy unless the enemy is preparing to fire first.
• U.S. forces cannot engage the enemy if civilians are present.
• Only women can search women.
• Troops can fire at an insurgent if they catch him placing an improvised explosive device but not if insurgents are walking away from an area where explosives have been laid.

More recently, soldiers on daily patrols who go into lightly populated exurban areas to provide supplies for the populace do so “lightly armed.” That is, most soldiers carry only their side arms. It is advised, but not mandated, that when addressing a tribal elder that a soldier remove their helmet as a sign of respect and comfort – unsurprisingly, few soldiers do so.

A March 26 New York Times/CBS poll shows that more than two-thirds of Americans want out of Afghanistan. Even those that at one point or still support the war find the present state of affairs in that South Asian nation untenable. Many question the utility of our continued presence there. They’re right to do so – but it is the attitudes of some like Marks who perpetually tie the hands of our soldiers that make the job of securing that state and leaving a stable nation behind more difficult. And that should be the primary goal of U.S. forces in Afghanistan, because there will be no full withdrawal without stability.