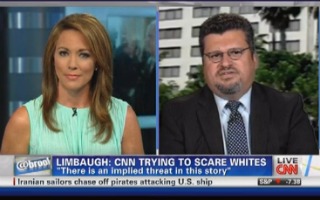 Radio host Rush Limbaugh expressed his objection to a CNN.com report relating to the shifting demographics in the United States, saying that there was an “implied threat” in the story.

Earlier, CNN.com published a story on the country’s booming Latino population and what it means for the Republican party, inspired by census data showing that, for the first time in the country’s history, more than half of children born in the U.S. are of a racial or ethnic minority.

On his show, Limbaugh said that “it is clear that this and other similar stories like this are meant to serve as a warning to Republicans and conservatives. And the warning is ‘you are on the wrong side of history and you are on the wrong side of demographic. You better do what the common majority wants right now or you’re going to suffer the consequences.’ There is an implied threat in this story.”

CNN anchor Brooke Baldwin brought on CNN contributor Ruben Navarrette, Jr. — who published a response to Limbaugh’s comments — onto the show to discuss the issue further.

RELATED: CNN Reacts To Rush Limbaugh’ Claim That The Network Is Trying To ‘Scare Whites’

Navarrette took issue with Limbaugh’s implied assertion that “somehow that, one, if you’re a news agency, a columnist, a pundit, and you bring attention to a very important, historic news story, that’s somehow you’re automatically, you know, trying to divide the country or make victims out of people.” He also called the ideas the minorities are somehow hellbent on gaining power and “getting even” little more than “nonsense.”

Limbaugh had apparently taken particularly issue with the following quote within the original CNN.com story:

“The Republicans’ problem is their voters are white, aging and dying off,” said David Bositis, a senior research associate at the Joint Center for Political and Economic Studies, who studies minority political engagement.

“There will come a time when they suffer catastrophic losses with the realization of the population changes.”

“Isn’t that, though, really, an over-generalization of the Republican base?” asked Baldwin.

Navarrette noted that he wouldn’t have said that, calling the quote “inflammatory” and both it and Limbaugh’s reaction to it ultimately “unhelpful.”

Baldwin then asked whether Limbaugh’s complaint was actually a bit more nuanced than Navarrette was giving him credit for. Navarrette revealed that he actually listen to Limbaugh daily and likes a lot of what he says despite not always agreeing with all of it. He did add, however, that the radio host “tends to go off the rails” when discussing matters related to race and ethnicity.

“It’s just a paranoid fantasy,” said Navarrette of Limbaugh’s interpretation. He later added that, while he agrees with the sentiment that some minority groups are “too quick to see themselves as victims,” he feels that white individuals “can’t decry the idea of becoming victims until they get a chance to be one.”