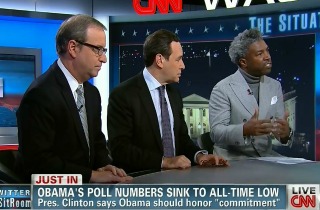 CNN political analyst Cornell Belcher took aim at the political media and his own network on Tuesday when he accused the press of manufacturing and hyping a conflict between President Bill Clinton and President Barack Obama over the implementation of the Affordable Care Act.

CNN anchor Wolf Blitzer opened the segment by reporting on the results of the latest Quinnipiac University poll which found Obama sinking to 39 percent job approval – the lowest of his presidency in that poll.

RELATED: Bill Clinton Scolds Obama: ‘The President Should Honor the Commitment’ He Made

“It’s a pox on all Washington’s house because Washington isn’t working,” Belcher said. “I’ve got to say that I think we in the media are helping drive this.”

Belcher referenced an interview that Clinton gave on Tuesday in which he said, “[T]he president should honor the commitment the federal government made to those people and let them keep what they got.”

“We’re reporting that – what Bill Clinton is saying which is, in fact, exactly what the president said to NBC,” Belcher submitted. “He talked about how we should fix this and people who want to keep their health care plans, we should work out a way to fix this.”

“There is not an inch of difference between where Bill Clinton is and where the president is,” Belcher concluded. “This is a creation of the media.”

National Journal’s Ron Brownstein disagreed. He said that Clinton’s suggestion would threaten the financial stability of the ACA as written because the pool of people in the exchanges would rely too heavily on the program and not enough healthy people would be subsidizing their care.