HLN Host Ryan Smith: Trayvon Was Just ‘Being Descriptive To What He Sees’ When Calling Zimmerman ‘Cracker’
video

HLN Host Ryan Smith: Trayvon Was Just ‘Being Descriptive To What He Sees’ When Calling Zimmerman ‘Cracker’ 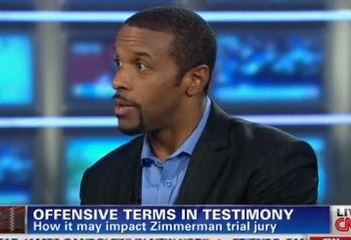 During testimony in the trial of George Zimmerman for the murder of Trayvon Martin, a key witness for the prosecution revealed that Martin had referred to Zimmerman as a “creepy-ass cracker” moments before he was shot. The witness said that this was not, as she understood it, a racial term. During a segment on CNN, one of the network’s contributors agreed with this assessment. He added that Martin was merely using what is an acceptable descriptive term in “the black community” when he called Zimmerman a “cracker.”

“The issue is the word cracker,” said CNN anchor Brooke Baldwin expressing incredulity over the assertion that the word was not a racial slur.

“For a lot of black folks all over the country, for a lot of Southern folks, nothing wrong with that statement,” Smith said.

He said that the Zimmerman trial has exposed a cultural divide between the teenage black witness, Rachel Jeantel, and Zimmerman’s “older white guy” attorney, Don West.

“Is he trying to say something about George Zimmerman and his race? No,” Scott continued. “Really, that was Trayvon just describing a situation.”

Baldwin replied, recalling her experience growing up in the South, that “cracker” is not only a racial term but an offensive term.

“But he’s not saying it to be offensive to George Zimmerman, he’s being descriptive to what he sees,” Scott asserted.

Scott said that, like the ‘N-word,’ cracker is used “in the black community” as merely a descriptor and is not intended to be offensive. He added that, under the circumstances that Martin faced when he was being followed by Zimmerman, he can be excused for using colorful language.