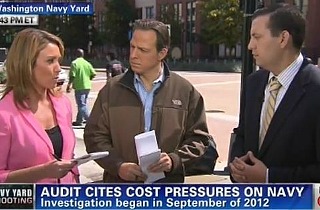 Speaking with TIME reporter Zeke Miller on Tuesday, CNN’s Brooke Baldwin and Jake Tapper dug into claims made by some officeholders that sequester budget cuts may have contributed to the scale of Monday’s massacre at the Washington Navy Yard. They said that, according to an Inspector General report, sequester is not responsible for the “cost pressures” which did force the Navy to scale back security procedures.

RELATED: Did The Sequester Create Edward Snowden?: The Unexpected Consequences Of Budget Cuts

On Tuesday, Washington D.C. Mayor Vincent Gray alleged that sequester cuts forced the Navy to scale back its security preparations which may have contributed to the massacre. Rep. Mike Turner (R-OH) also indicated, based on an Inspector General report, that “cost pressures on the Navy” have resulted in security breaches.

Miller said that allegations that the sequester cuts can be blamed for lax security is erroneous because the Inspector General report investigated cost pressures which predate sequester.

“You can blame it on the general pressures on Department of Defense, and really the entire federal government over the past several years, to bring down their costs,” Miller said. “But this is certainly – this isn’t the sequester.”

“This was a decision that somebody made. This wasn’t something that was forced on the Navy,” he continued.

The report indicated that a number of convicts and people who should not have had access to military sites have accessed those sites in recent months.

“Had any of the advice he been taken from the inspector general report, could this have been avoided in any way?” Jake Tapper asked rhetorically. “Again, it’s so early, we don’t know.”