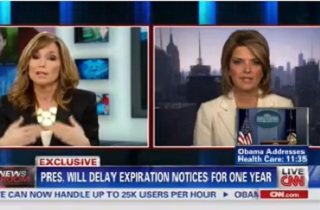 As they awaited President Obama’s announcement of a proposed administrative fix to the “Keep Your Plan” promise of Obamacare, CNN cut away to remarks by House Minority Leader Nancy Pelosi (D-CA), apparently hoping she would comment on the story of the moment that she started rolling this morning. Instead, Leader Pelosi began with remarks about the unfolding tragedy in the Philippines, so CNN decided to dump out of the remarks temporarily, but chose an awkward moment to do so.

As Christine Romans spoke about the upcoming Obamacare announcement, anchor Carol Costello cut her off. “I have to interrupt you,” she said. “Nancy Pelosi has begun speaking. Let’s listen. Sorry, Christine. ”

Leader Pelosi began her remarks by talking about the victims of the super-typhoon in the Philippines, and the Filipino-Americans whose loved ones are being affected by that tragedy. She began to speak emotionally about a recent encounter with such a loved one. “It was emotional for me on Monday in Arlington,” Pelosi said, “when we were there for the placing of the wreath. Some of the Filipino vets who risked everything for our country, one of the ones that I met at Arlington was in…”

At that point, CNN dumped out of Pelosi’s remarks, as Costello cut in by saying “We’re going to step away as she talks to her constituents about the tragedy in the Philippines. Let’s go back to Christine Romans for a second. You were mentioning some bright notes to Obamacare.”

Here’s the video, from CNN Newsroom: