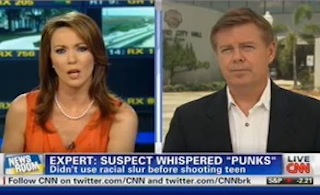 CNN’s Martin Savidge told Brooke Baldwin that audio forensics expert Tom Owen determined George Zimmerman said punks on the 9-1-1 call he made the night he shot Trayvon Martin, not a racial slur as has been previously reported.

“Martin, you’ve gotten ahead of this newly enhanced audio. what does it reveal?” Baldwin asked Savidge.

“Let me tell you how this all happened,” Savidge explained. “Last night, I had a conversation with attorneys that represent George Zimmerman and I specifically asked about the issue of the racial slur because it is so inflammatory in the whole story. They said Zimmerman never made it. I said have you asked George Zimmerman about that. They said, yes, they did, George told them the words he used were f-ng punks and I got a hold of Owen Forensic Services, a company that specializes in audio enhancement and improvement. The first thing he noticed is at the very moment George Zimmerman says whatever comes out of his mouth, the phone takes a hit — whether a electronic interference hit or may have physically been bumped and had that distorted what was recorded and what everybody says they heard. He was able to isolate that interference, remove it, slow it down to a few other things and this is what he got.”

“What he says, analyzing it carefully and clearly, is the word punks. Essentially what we have here, a lot of questions still about what George Zimmerman did on the night that he shot Trayvon Martin. His attorneys and at least one audio analyst expert say he did not use a racial slur,” Savidge reported.

Watch the video below via CNN: