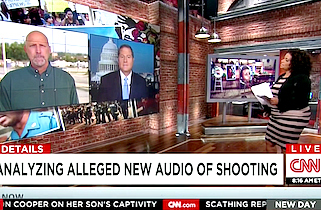 Former LAPD officer David Klinger and CNN law enforcement analyst Tom Fuentes both told CNN’s New Day Wednesday morning that the recording the network has been airing that allegedly captured the shots fired at Michael Brown could quite easily be a hoax.

“I have no idea [if it’s authentic],” Klinger said. “I’ve told your producers that for all I know this is something one of Howard Stern’s punk people had been doing. …I look at this and my first inclination is someone is trying to punk CNN.”

“When I heard this yesterday, I thought the exact same thing: it’s a hoax,” Fuetnes said, explaining:

“The engineers in the laboratory at Quantico will be trying to determine if there was a dubbing; did we have an original recording of this guy having a conversation no one wants to talk about, and then the shots then dubbed over it; was it the complete tape? All accounts from Brown’s side and the officer’s side say there was a single shot fired initially at the door of the police car. So that shot, followed by Brown trying to flee, and then the officer exiting the car and pursuing him and then firing the series of shots — so we’re missing that first shot. Now, I don’t know, CNN got this tape first. Did they censor it because the guy said something obscene over the first shot and they didn’t want to air that? We just don’t know all that.”

New Day cohost Michaela Pereira defended the airing of the tape. “It needs to be said the lawyer who is representing the man who gave us the audio gave it to us, she swears it is real,” Pereira said. “We have no reason here at CNN to believe that it’s not true.”