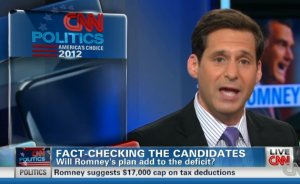 While much of the morning-after debate talk is often about its inherent performance art, there’s this one other thing that also matters: facts. And given that politicians are wont to ignore and/or distort them, CNN’s John Berman checked some of their claims this morning.

Berman honed in a couple particular claims made by President Obama and Mitt Romney regarding tax cuts and Medicare. First off: Obama’s claim that Romney is proposing $5 trillion in tax cuts. Berman deemed this false, because, while Romney does propose a 20-percent across-the-board tax cut, he also plans to offset that cut by closing some loopholes and deductions.

That brings us to Romney’s countering claim that his tax cuts won’t add to the deficit. Berman gave him an incomplete on this one — because “all we have here is his word because Mitt Romney really has not laid out any specifics for how he will pay for his tax cut,” without specifying which loopholes he’d close or deductions he’d eliminate.

And then there’s Medicare. Which Berman said was “a missed opportunity for Obama,” before tackling Romney’s repeated claim that Obama is cutting $716 billion from Medicare, which will affect current people in the program. Berman’s verdict was false.

Obama is not proposing cuts to Medicare, Berman said. “Medicare will still grow, it will just grow more slowly…and also that money is coming from insurers and providers, not beneficiaries.”

Of course, this is just a sampling. Indeed, there are other claims worth checking, and we can be pretty sure they weren’t all true.