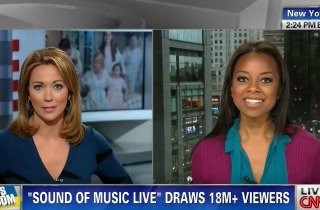 On Thursday night, NBC broadcast a remake of The Sound of Music staring recording artist Carrie Underwood. The production debuted after weeks of publicity and drew more than 18 million viewers. But not everyone loved the remake of the classic Rogers & Hammerstein property. For those who did not enjoy the production and want their opinions validated, CNN provided a handy roundup of negative tweets critical of the NBC hit.

“Looking at my twitter feed, people paying their respects to Nelson Mandela or hating on Carrie Underwood,” CNN anchor Brooke Baldwin revealed. “But, I guess she can take the hate to the bank, huh?”

CNN reporter Nischelle Turner dismissed the criticism, noting that there will always be “haters” who attack people and events for its own sake. That having been said, she provided a few examples of tweets excoriating NBC and Sound of Music.

“There was a lot of backlash last night over this live event,” she said, noting that Sound of Music was NBC’s most-watched live broadcast since 2009.

“Did NBC forget that there would be parts where Carrie Underwood doesn’t sing & we’d have to watch her try and talk words?” wrote one woman named Kelly Phillips who, according to her twitter account, has 159 followers.

CNN did feature some popular commentators weighing in as well. Actor Rob Lowe tweeted, “Okay, so some of the acting is pretty bad, but you can’t have everything.”

“Maybe, since the numbers were so great, maybe we’ll see more live shows from NBC,” Baldwin speculated. “Hey, here’s to stepping out of the box, I suppose.”