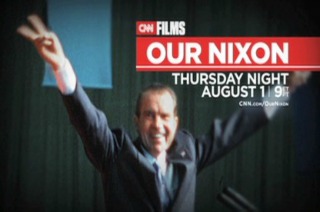 History repeats. Pfc. Bradley Manning and NSA leaker Edward Snowden are not the first to put the government in an awkward position by revealing sensitive documents to the press. On Thursday night, a CNN Films documentary, which features a number of unseen home movies shot by President Richard Nixon’s top aides, sheds light on another period in American history when public officials and members of the media were wrestling with the same questions that some are tackling today relating to leakers. While the film, Our Nixon, focuses primarily on how Nixon’s staff tackled the controversies surrounding the Watergate break-in and the ensuing cover up, the film also touches on how the 37th President of the United States handled his own leakers. His take: prosecute the leakers, not the press.

Our Nixon will air on August 1 at 9 p.m. ET on CNN and again over the weekend ahead of a theatrical release at the end of the month. The film, from producer by Brian Frye and producer/directed Penny Lane, features archival interview footage, news clips, and home movies to put a fresh and personal perspective on the household names that made the Nixon White House run.

Many of these home movies were confiscated by the FBI during the investigation into Watergate and locked away for decades. For many, this film will be the first time anyone has ever seen this footage featuring – and often filmed by — enigmatic figures like H. R. “Bob” Haldeman, John Ehrlichman, and Dwight Chapin.

Early in the film, Nixon was asked to react to the release of the Pentagon Papers in 1971 by Daniel Ellsberg. Those leaks, which ultimately lead to the Watergate break-in, were published in the New York Times and created a number of headaches for the Nixon administration. As the president’s secret White House recordings reveal, when asked if he would like his Justice Department to investigate the Times with an eye toward prosecution, Nixon recoiled:

John D. Ehrlichman: Mr. President—
President Nixon: Hi, John.
Ehrlichman: —the Attorney General [John N. Mitchell] has called a couple times about these New York Times stories, and he’s advised by his people that unless he puts the Times on notice—
Nixon: Yeah.
Ehrlichman: —he’s probably going to waive any right of prosecution against the newspaper. And he is calling now to see if you would approve his putting them on notice before their first edition for tomorrow comes out.
Nixon: Hmm.
Ehrlichman: I realize there are negatives to this in terms of the vote on the Hill.
Nixon: You mean to prosecute the Times?
Ehrlichman: Right.
Nixon: Hell, I wouldn’t prosecute the Times. My view is to prosecute the goddamn pricks that gave it to them.
Ehrlichman: Yeah, if you can find out who that is.
Nixon: Yeah, I know.

For anyone with a passing interest in either the era or in how the government is currently handling the leakers in its midst, Our Nixon is a must-see.