CNN Finds Out Who Exactly Are The 1%

CNN Finds Out Who Exactly Are The 1% 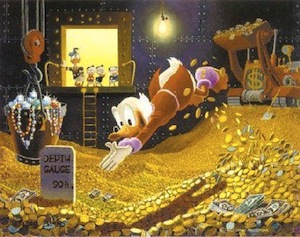 As the mounting Occupy Wall Street protests are showing up in cities across the country, many things are being reported, save for some statistical details. Over the past few weeks , the coverage of OWS has trended either to the organized groups and their signs, or the images of conflict and unrest. What scant attention the true thrust of the movement has garnered is often spent fulminating over the disjointed message coming out of the rallies. Evidence of this is found in those debating if there conflict with the previous Tea Party rallies, or if there is, indeed, overlap in the messages from the groups.

What has not been analyzed, however, is exactly who is falling under the respective banners of the 99% and the 1%. Assumptions are that the larger number includes the workforce, the economically downtrodden, and basically anyone categorized as less-than-affluent. In contrast, the miniscule number is thought to be the dominion of the hyper-elites. There is an inevitable blurring of those lines, however, smudged further by the arrival of support from those who often are regarded as being among the upper crust – namely celebrities.

This itself is not problematic, but it does breed confusion. For instance, can Kanye West really align himself with the 99% while wearing $3,000 jeans? One of the biggest advocates of these rallies has been Russell Simmons, best-selling author of “Super Rich: A Guide To Having It All”. How is his message interpreted by those railing against banks, when he is the credit line force behind The Rush Card?

Distancing from those celebrity optics, we finally have a news source digging into the statistics, and the numbers are, in fact, not only surprising but sobering. CNN Money has looked into the financials, and what they reveal is that the upper 1% is not strictly the realm of the pampered palatial-dwelling aesthetes and G6-riding moguls. In fact, a relatively small number of these financial titans actually occupy addresses or offices in or around Wall Street. Most surprising, however, is what actually constitutes that arena described as “The Top 1%”. According to federal tax figures the amounts may be surprisingly lower than most expect:

But the income threshold for this exclusive group changes every year, largely with the performance of the stock market, experts said.

Notably, that gross income is woefully shy of the annual debt figure this nation is currently incurring. And I am certain that a majority of those taking to the streets would be surprised to learn that the upper crust, those receiving the bulk of contempt, on average take in less than $1 million year, and somebody could make less than $350K in order to enter this elite club. When stars like Susan Sarandon and Mark Ruffalo earn multiples over that figure with a solitary film appearance, it sheds new light on the debate. And this is a threshold that has been lowered in the past few years; with the economy foundering it now takes less money to “ascend” into this 1% stratum.

Furthermore, when taking a look at the richest Americans, you note two things about this crowd. First, the list is not choked by those from the financial sector who typify Wall Street avarice. Second, a great deal of those situated at the top come not from entrenched corporate titans, but from relatively new, first or second generation or self-made executives, springing up in just the past few decades. While there are the expected accursed financial giants – Warren Buffet, the Koch brothers, and George Soros – much of the Forbes Top-20 consists of entrepreneurs making their wealth away from Wall Street.

The list of names, while familiar, shows many who have risen to the top with new ideas and unexpected success. You see not only Bill Gates (Microsoft) but Larry Ellison (Oracle), Christie, Jim, and Alice Walton (Wal-Mart), Jeff Bezos (Amazon), Mark Zuckerberg (Facebook), Sergey Brin and Larry Page (Google), as well as Michael Dell (Dell Computers). Rounding out the list is the older yet far-from-financial Mars family, of confectionary fame.

So, does the CNN report undermine or discredit the OWS movement? Of course not. However, it does something that has been in starkly short supply these past few weeks, and that is bringing into focus the actuals behind the touted metrics. It also suggests that the focus of ire may be misdirected on some level. Wall Street may be part of the problem, but just how big of a part seems less obvious.

Brad Slager is a freelance writer who has covered the film industry for years, including the Sundance Film Festival. He is currently a columnist for CHUD.com where he cover marketing behind new film releases.