CNN Follows Up With Senate Candidate On Creepy Interview With Son: ‘No Conspiracy Theories’ Afoot
video

CNN Follows Up With Senate Candidate On Creepy Interview With Son: ‘No Conspiracy Theories’ Afoot 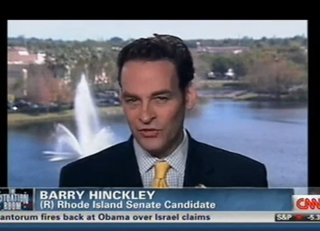 Rhode Island Senate candidate Barry Hinckley landed an endorsement from his five-year-old son, Hudson, and the two appeared on a segment with Neil Cavuto last week in perhaps one of the weirdest interviews of 2012. On CNN today, Jeanne Moos followed up on the interview with Hinckley to ask– why was he mouthing every word his son said? Responds Hinckley, “there were no conspiracy theories, no cue cards.”

RELATED: WTF?! Interview With Senate Candidate And 5 Year-Old Son From Ad Is Creepiest Thing Ever

Moos went about New York showing people the interview, and noting how creepy and unsettling many people found it. After explaining how bizarre the miming the candidate did of his son appeared (citing our own Jon Bershad), Moos spoke to the candidate, who explained that nothing sinister was happening in the interview at all. “I was nervous because I was on national television for the first time,” he explained, “no conspiracy theory, no cue cards.” He noted it was the “first time I’ve worked with a five year old live” and lamented it “didn’t go as planned.”

Our people managed to track down Bershad for exclusive comment on on spearheading the discovery of this bizarre clip, and he had this to say in response to Moos’ follow-up:

“This segment was wonderful. Mostly for the part where Hinckley explains that he doesn’t have echolalia. Honestly, it’s a weight off my shoulders knowing that I haven’t spent the weekend leading the nation in mocking a guy with a disorder.”

The segment on CNN below: