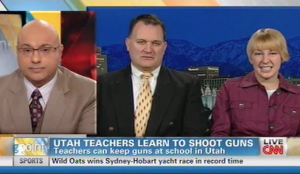 Since the tragedy, Aposhian has offered free gun training to about 200 teachers in Utah. The training equips them with the skills, he argued. They still have the choice of whether they want to be armed. Hansen, a K-12 special education teacher, took the course but said she currently does not own a gun.

With additional training, Hansen said she would consider bringing a gun to school. “I would take a bullet for any one of the students in the school if it came down to it, and I just want extra options to protect myself as well as my students,” she said.

Host Ali Velshi asked about the extra precautions needed in a school, in terms of making sure the weapon doesn’t end up in the wrong hands. Aposhian argued that we trust teachers to be around our children for eight to nine hours a day, so “why would anyone think they would act in some way to put children at harm?”

“We’re gonna give folks like Kasey another option rather than jumping in front of a bullet,” he added. “It’s why we put fire extinguishers and medical kits in classrooms.”

That prompted Ron Brownstein to ask who else should be armed, if that’s the case. Firefighters and movie theater workers, too? “We shouldn’t necessarily disarm firefighters,” Aposhian replied. He went on to note that when there’s a shooter in a school, people seek emergency response from people with guns. But “the people with the guns show up a little too late.” The actual first responders, he said, are teachers like Hansen.

Roland Martin, too, was skeptical, questioning whether parents should be notified if their children’s teachers are armed. Aposhian didn’t see why they should be, because the teachers are acting “in a professional manner.”

Velshi then noted that Aposhian is placing emphasis on thorough background checks. To that point, he alluded to a Salt Lake Tribune article about Jason Derek Brown, who was charged with shooting and killing an armored-car guard. Brown took Aposhian’s class. Aposhian argued that Brown wasn’t an FBI fugitive when he taught him.

Countering that, Velshi contended that Brown took his class, and then became a fugitive after allegedly shooting someone dead. Aposhian said he never had an opportunity to pass a background check. Velshi asked how he got the gun then, and Aposhian replied, “We sold him the gun.” The CNN host then questioned how he got a gun without a background check, prompting Aposhian to grow defensive and clarify that there are two background checks, one for concealed carry and one for the firearm. Brown passed the latter.

“That was my question,” Velshi concluded.