CNN Guest On Breitbart Tape: ‘The Most Scandalous Thing Is Obama Was Still Rocking Afro In 1990’
video

CNN Guest On Breitbart Tape: ‘The Most Scandalous Thing Is Obama Was Still Rocking Afro In 1990’ 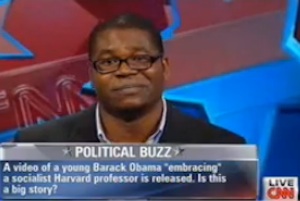 “The most scandalous thing about this video is Obama was still rocking an afro in 1990. I mean, that was the weirdest thing I saw in the video. There was nothing strange about this whatsoever. He’s doing something political and he’s chatting with a bunch of people. To be honest, the sad part of this — and not to speak ill of the dead — but this is the legacy of Andrew Breitbart — the idea of promoting these ‘scandalous’ videos that will change the landscape of American politics and it’s not that big of a deal and I wasn’t shocked except for the haircut.”

Democratic strategist Maria Cardona was equally unperturbed by the video’s contents and feigned shock over its allegedly scandalous implications.

“When I saw this clip, Carol, I had to avert my eyes!” Cardona snarked. “I thought it was the most scandalous thing I’d ever seen. We should call for impeachment right now. I can’t take this. I can’t do this anymore, Carol. Oh, my god. This is so ridiculous. A Harvard law student introducing a Harvard law professor? I don’t think the American people will be able to handle that, Carol. Seriously!”