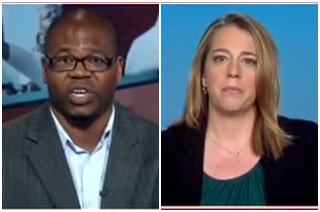 A discussion over yesterday’s incident between Press Secretary Jay Carney and a Daily Caller intern broke loose on CNN Thursday morning, with columnist and professor Jason Johnson calling it “an obnoxious frat boy stunt” and telling the Daily Caller it “should be ashamed.”

Intern Gabe Finger was unexpectedly called upon at Wednesday’s White House daily briefing, and he inquired whether any presidential actions might be taken in response to the death threats the George Zimmerman family says it has received. When Finger followed up with, “So they’re on their own,” Carney snapped, “You can editorialize all you want, and I’m sure that you will, but that is a ridiculous statement.”

“I think Carney was responding to an obnoxious frat boy stunt,” Johnson said. “There was no point in having a sixteen year old ask a provocative and incendiary and unnecessary question. He didn’t know what situation was necessarily going on with the Zimmerman family. Everyone knows perfectly well that Barack Obama would have no responsibility for protecting them. It was a stunt, and it’s something that the Daily Caller should be ashamed of.”

“I don’t think he expected to get the angry response out of Jay Carney that he got,” responded Nicole Roeberg, Communications Director for the Daily Caller. “He went with a reasonable question that no one else asked. Zimmerman’s parents were on another network earlier this week saying they’re afraid to go back to their house because they’ve had hundreds of death threats, and no one’s brought that up.”

“He’s been doing great work for us all summer long,” Roeberg said of Finger. “He was prepared with a question. We like to send our interns out to do real things. We don’t have our interns making coffee and making copies. We have them going to press conferences and going to events on Capitol Hill and writing stories with bylines that get published on our website.”

Johnson didn’t buy it. “It wasn’t a sincere question,” he said. “You can tell by his reaction it wasn’t a sincere question. This is the second time the Daily Caller has done this this year. Please tell me me some other instance where the President of the United States is going to take personal responsibility for protecting a family because the public doesn’t like a jury ruling. It doesn’t make any sense…It was just a stunt to bring some attention. They should be ashamed for putting a sixteen year old—”

Roeberg tried to dispute this over the end of Johnson’s sentence. He took offense, requesting: “Would you please stop interrupting me because I pointed out that you did something very inconsiderate with a sixteen year old?”

“Sorry,” Roeberg replied. After Johnson ceded his time, Roeberg said, “It was not a stunt, it was not planned…Generally these press conferences don’t produce a lot of news. They happen every single day. I don’t know when the last time news was made at an actual daily briefing. So we asked a question. It was a relevant question, it should have been asked.”