CNN Guests Explode Over The Existence Of ‘White Hispanic’: Sorry To ‘Polarize You With A New Term’
VIDEO

CNN Guests Explode Over The Existence Of ‘White Hispanic’: Sorry To ‘Polarize You With A New Term’ 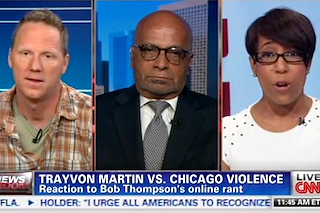 Comedian Bob Thompson and Atlanta radio host Mo Ivory exploded at each other on CNN Wednesday, loudly disagreeing over the provenance of the term “White Hispanic” and the role of race in the George Zimmerman trial and beyond.

Thompson objected to the racial lens he said the media used in covering the Trayvon Martin shooting, though he struggled to reframe the case in non-racial terms. “We keep categorizing this as a black/white issue, and that’s the problem,” Thompson said. “A term was invented for this case—’White Hispanic.’ That never existed before this case.”

Ivory responded that it most certainly did:

“Bob’s answer that this is the first time we’ve heard the term White Hispanic brought in by the media is jsut an example of how different people live their lives, and how unexposed people are in this country to the race that exists every single day. I’m half-Hispanic and half-black. I’ve heard the term ‘White Hispanic’ my entire life. Bob, just the fact that you’ve never heard that shows what a limited space you’re living your life in…Because that is not a new term. So it takes a case like this to—Oh my gosh!—polarize you with a new term.

“Here’s the thing: the minute you started off this conversation it was all about getting me in that ‘gotcha’ moment,” Thompson responded. “That’s the problem with these conversations that we have in the media, it’s all about ‘gotcha.’ You got me! Ninety-nine percent of the world has never heard about the word ‘White Hispanic.’ You may have.”

“I don’t want to get you,” Ivory said. “I want to educate you. I want to help you understand that what you’re living in right now is not the world that a lot of people live in, it’s certainly not the world minorities live in.”

Throughout the argument, conservative pundit Joe Hicks sat awkwardly in the middle section of the screen, looking like he wanted to put his fingers in his ears.