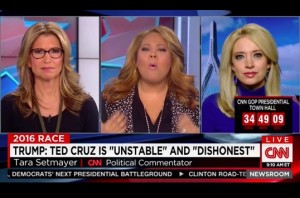 As is part of any Republican party nominating process, sweeping comparisons to GOP historical darling Ronald Reagan are frequently invoked on the campaign trail. The topic came to a head Tuesday morning on CNN, when Carol Costello welcomed two Republican strategists whose differing views on the Trump phenomenon reveal the divisive viewpoints within the party itself.

In this corner, Kayleigh McEnany, the seeming advocate for Donald Trump‘s candidacy who argued that Texas Senator Ted Cuz has done nothing but mischaracterize the real estate mogul’s record. “Donald is frustrated; I understand that,” noted McEnany to Costello. She furthered to suggest that in no way does Trump want to “repeal and replace the second amendment,” as Cruz would have voters believe.

Tara Setmayer was having none of it, firing off, “They pull your record and you have to defend it,” identifying that the current GOP frontrunner has often held more liberally-accepted views.

Setmayer: “Which Donald Trump was that? He changed his opinions on all those things. He was a Democrat util about a year ago.”

McEnany: “So was Ronald Reagan.”

Setmeyer, who also identified Donald Trump as the “rich bully on the playground” exasperatingly told McEnany, “Stop comparing Donald Trump to Ronald Reagan!” The latter attempted to argue that just like our 40th President, Donald Trump had an intellectual pivot on his evolving viewpoints as well.

Check out the above video from CNN.
[image via screengrab]
—