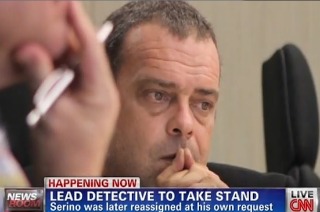 As the trial of George Zimmerman for the murder of Trayvon Martin resumes on Monday, a CNN panel previewed what is expected to be the testimony of former Det. Chris Serino. Serino interrogated Zimmerman on the night of the murder and is expected to be a key witness for the prosecution. The CNN guests and anchor ntoed that his testimony could reverse the trajectory of this trial.

CNN anchor Carol Costello asked HLN contributor Jason Johnson about the suspicious circumstances surrounding Serino’s recent reassignment and suggested that it may have had something to do with the fact that the former homicide detective was an advocate for the arrest and charging of Zimmerman early on in the investigation.

They played a clip of the recording of Zimmerman’s interrogation in which Serino berated the suspect over his shooting of an unarmed minor.

Criminal defense attorney Page Pate told Costello that Serino’s testimony would help illuminate whether Zimmerman was acting lawfully when he engaged in a fight with Martin.

“If he initiated the fight – if he’s in there throwing punches – just because Trayvon throws a few himself and may even be winning at some point, does not give Zimmerman the right to take out a gun and shoot him,” Pate said.

“But how can you possibly figure out who threw the first punch?” Costello asked.

“That’s where Rachel Jeantel comes in,” Johnson said. “When she claims that she hears the phone drop.”

“Zimmerman had a gun in the chamber,” he continued. “He got out of the car with the gun ready to shoot. He didn’t have the safety on.” Johnson said that the prosecution could string all these events together and possibly establish for the jury that Zimmerman was the aggressor.