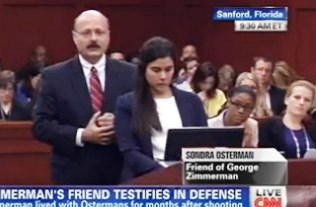 One of the most irritating characteristics of the George Zimmerman murder trial has been the news media’s inconsistent, obtrusive censorship of profanity, a facet that was on display in the opening moments of the trial. During Monday morning’s cross-examination and re-direct of defense witness Sondra Osterman, CNN’s efforts at censorship reached new levels of ridiculousness, as prosecutor Bernie de la Rionda sneak-attacked the witness with a recording of George Zimmerman saying “These assholes always get away,” then had long passages of his cross blanked out by CNN, only to have defense attorney Mark O’Mara repeat the phrase “fucking punks” as clear as a bell.

Sondra Osterman is the wife of Zimmerman “best friend” Mark Osterman, and both are co-authors of the book Defending our Friend; the Most Hated Man in America. On direct examination, she testified that she recognized the screams for help on a 911 call as those of George Zimmerman, whom she repeatedly referred to as “Georgie.”

Prosecutor de la Rionda began his cross-examination by introducing the subject of her book, in an attempt to show bias. Osterman said that the proceeds from the book ere being deposited into a savings account, to be given to George Zimmerman at some later time. He then asked Mrs. Ostermann if the fact that she knew the tape had to do with George Zimmerman’s case influenced her judgment when she heard the tape, which she denied. He then quickly asked her to “listen to this and tell me if you recognize this voice,” and played George Zimmerman’s non-emergency call to police.

“These assholes always get away,” Zimmerman’s voice is heard to say, uncensored.

The defense interrupted to ask for the tape’s exhibit number, at which point de la Rionda explained, “I didn’t want to tip her off of the recording.”

The cross was also punctuated with the second-most irritating feature of the trial, the attorneys’ constant need for a laptop whisperer to come show them how to play sound clips Every. Single. Time. These guys have sub-series-of-tubes proficiency with computers.

The prosecutor continued his cross, and CNN’s censors caught up to him, blanking out not just profanity, but large portions of his questions. The purpose of his cross was to ask Mrs. Osterman if she thought utterances like those CNN bleeped

However, on re-direct, defense attorney Mark O’Mara asked Osterman, uncensored, if she thought the phrases “fucking punks” and “these assholes always get away” were indicative of ill will or spite, which she did not.

“Did that seem to just be an off hand way of talking to whoever it was he was talking about?” O’Mara asked.

“Yes,” she replied. She also indicated that she could not discern the words “fucking punks” from the tape.

The witness gave the prosecution an opening when O’Mara asked, of the screams for help, “Since you’ve never heard him scream like this before, how are you certain it’s (George Zimmerman’s) voice?”

“I just felt it,” Osterman replied. “I knew that it was him. I just knew it. And I saw the reaction that his wife had in listening to it. I mean, we were all together. It was definitely George.”

O’Mara did a quick course correction, asking Osterman “But it is your own opinion, separate and apart from everybody else’s, that the voice just heard was George Zimmerman screaming for help?”

Unfortunately for the state, de la Rionda ignored that significant slip-up on re-cross, focusing instead on the ill will and spite issue. He could have reminded the jury of it, without giving the witness another chance to refute it, by asking “You said ‘We were all together,’ so who else was present when you were watching George Zimmerman’s wife react to the 911 call?”

Osterman’s response could have opened up further lines of inquiry, and at the very least, have been used to cast doubt on the testimony of other witnesses who were present. It was a major missed opportunity, by a prosecution that already faces heavy criticism.

As for the media’s efforts at censorship, they are a failure, and should never have been attempted. This is a murder trial, being broadcast on cable television. Even if the networks were able to censor with any precision, it would be a poor exercise in journalism. If viewers are to evaluate the testimony they’re hearing, presumably the aim of gavel-to-gavel coverage, they need to be able to hear it. anyone who doesn’t want to hear cursing can read the “explicit language” banner, and go watch Judge Judy.

The fact that the nets allow copious amounts of profanity to slip through, while also bleeping out large portions of questions and answers, makes the practice completely useless. It should be abandoned.