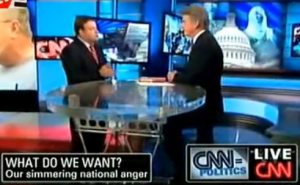 Host of CNN’s American Morning John Roberts asked Republican pollster and Fox News Analyst Frank Luntz “When you used charged language like that are you contributing to the anger?” This was but one of many highlights in a spirited interview between Roberts and the author of the new book What Americans Really Want…Really. Was this John Roberts’ moment?

The GOP pollster and paid Fox News contributor didn’t admit any role in stoking right wing anger despite being challenged by the CNN host over a memo he wrote to Republicans that outlined what Roberts called “charged language” to stop White House led efforts to reform health care.

The subject of Luntz’ book is what he sees as an unprecedented level of anger among the American electorate. Roberts asked: “You wrote a memo to the Republican Party, giving them suggestions on how to oppose the health care plan, suggested that they use phrases like ‘it’s a bailout of the insurance industry,’ ‘Washington takeover of the system.’ All of these words were out there. So my question is, did you help contribute to that anger?”

“But what is the first page of that memo?” Luntz responded. “That you must support health care reform. That’s exactly what Americans would say. We need to cover those people who aren’t covered.”

Roberts: “The question I have about all of this anger is, how much of it is organic and how much of it is ginned-up by the opposition to try to give Democrats a hard time? You know President Clinton was on Meet the Press with David Gregory yesterday and he said that the vast right-wing conspiracy was…extremely virulent”