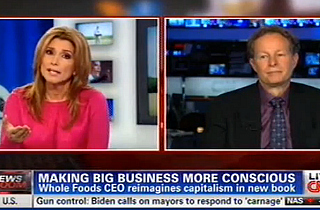 On CNN this morning, host Carol Costello confronted Whole Foods CEO John Mackey over his recent comments that ObamaCare was tantamount to “fascism” because “the government doesn’t own the means of production, but they do control it.”

“You initially labeled the Health Care Act a form of socialism, and then on NPR you called ObamaCare ‘fascism.’ Why did you decide to change the terminology?” Costello asked at the outset.

Echoing his statement yesterday that he regrets using the word “fascism,” Mackey explained, “That was a bad choice of words, but traditionally socialism means that the means of production are run by the government and in fascism the means of production are still owned by private individuals but they’re controlled by the government. And what’s happening. Our health care system is moving away from free enterprise capitalism towards greater governmental control. That was a poor choice of words due to the baggage and associations that go along with it. So now I’m just calling it ‘government-controlled health care.'”

An unsatisfied Costello then challenged Mackey, saying, “You realize when you say ‘fascism,’ it brings up Nazi Germany and all sorts of things. And we really want that kind language out of our public forum at the moment, don’t we?”

“Apparently you can’t use that word in America any longer, it’s taboo,” Mackey fired back.

Costello claimed that it is taboo because of some of his customer base’s negative reaction to the word: “Some of your customers though did express outrage at your use of that word. It was on the Whole Foods Facebook page. One person said, and I quote, ‘Of course, he regrets his word choice. It affects his bottom line. I do not believe this apology any more than I believe Mitt Romney’s attempt to get out from under his 47 percent comments.'”

“Everyone is entitled to their own opinions and beliefs,” Mackey responded. “This is America.”

Costello then asked, “But why inject yourself into the debate over ObamaCare in the first place?”

Mackey responded that he provides health insurance for 73,000 Whole Foods employees and some provisions of Obama’s health care law will raise his company’s costs. “It’s making it more difficult to provide the insurance at affordable rates to our team members, so I’m trying to protect them as well as I can,” he said.

“I think, though, that many of your customers probably wouldn’t agree with you since, I don’t know, you kind of run a store that appeals to the more liberal in America in some ways,” Costello replied.

“I don’t understand what your question or your point is,” Mackey said.

“I’m just saying some people feel Whole Foods is a politically-correct grocery store because you sell organic goods,” Costello explained. “You’re into health, et cetera, et cetera, and some of your customers might be taken aback because of that.”

“They might be,” the CEO replied. “But I mean, Whole Foods is a very diverse company. We have a multiplicity of opinions. Again, we’re the United States. We have freedom of speech. We’re a democracy. We need to have a variety of opinions shared in order for us to remain a vital and prosperous country.”