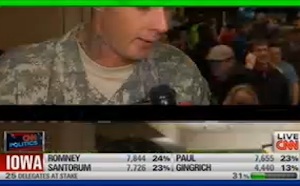 Bash met with Corporal Jesse Thorsen at a caucus site, and asked what he had liked about the Republican Congressman:

BASH: We have here Corporal Jesse Thorsen, who is 28 years old, and you are active duty US Army. Why did you vote for Ron Paul?

THORSEN: I’m really excited about a lot of his ideas, especially when it comes to bringing the soldiers home. I’ve been serving for ten years now, and all ten years of those have been during wartime. I would like to see a little peace time army, and I think he has the right idea.

BASH: You’ve done two tours and you’re going to go back for a third tour. You can see — your neck right there, a tattoo, 9/11, remember, and a picture of the twin towers. Some Republicans have been saying that Ron Paul would be very dangerous for this country, because he wants to bring troops like you back from your post from all over the world.

THORSEN: Well, I think it would be even more dangerous to start nitpicking wars with other countries. Someone like Iran, Israel is more than capable of —

All of a sudden, CNN’s feed was lost, and Wolf Blitzer tried to explain what happened.

“All right. We just lost our connection, unfortunately, with Dana. Dana, stand by, if we can hear you, we’ll get back.”

Innocuous technical issues or something more dark and sinister?

“It’s absolutely clear what happened here,” said one Paul fan on his YouTube channel. “The powers that be at CNN cut this guy off because he stood for everything that he shouldn’t. He was one soldier who was too smart for his own good.”

Later in the evening, Paul singled out Thorsen for his support.

Watch Paul introduce the soldier during his Iowa concession speech: