CNN Meteorologist Warns Us Doomsday Is Now 5 Minutes Away
video

CNN Meteorologist Warns Us Doomsday Is Now 5 Minutes Away 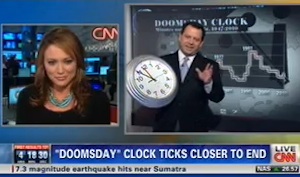 CNN senior meteorologist Chad Myers told an incredulous Brooke Baldwin that the Doomsday Clock was ticking ever-so closer to midnight. “I wasn’t aware one of these existed until I read this the other day, but there is a clock that apparently predicts when the world will end and it just got one minute closer to midnight,” Baldwin fretted. “I laugh, should I be? Is this serious stuff?”

“Only in the context of when the world’s going to end,” deadpanned Myers.

“Let me back up just a few minutes and tell me what’s coming, why it’s going and why we got a little closer to death today,” Myers deftly explained. “1947 — it starts. Somewhere around ’49, the Soviet Union explodes an atom bomb, and then we explode a hydrogen bomb. At that point, we are only two minutes away from dying on this clock. Then we get better. In 1953, we have a nuclear test ban, we’re doing okay. In the ’60s, it escalated in ’68. Then all of a sudden, President Reagan was elected. everybody remembers him as a statesman, and he pulled down the wall. But in 1981, he said the only way to win the Cold War, if you we understand it, was to win it. So all of a sudden back in 1982, this thing was five minutes away. The bombs we were building, we were going to destroy the Soviet Union!”

“Don’t mean to interrupt your flow,” interjected Baldwin. “But this whole thing is predicated on historic event?”

Myers explained more of the history of the organization that decides when the clock moves and how news on nuclear matters affect its position.

“Nobody is even talking about getting ready of any of their weapons. we’re not getting farther away from death, we are getting closer to it, but it’s not really five minutes,” Myers concluded.

In case you’re worried, Charles Schultz reminded us, “Don’t worry about the world coming to an end today. It’s already tomorrow in Australia.”

Watch Myers alert CNN viewers that the world is closer to doomsday below: