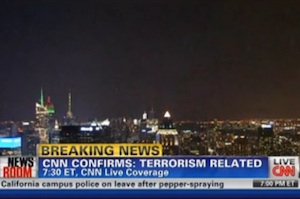 CNN reports that a lone-wolf terror suspect has been arrested who was in the process of building a pipe bomb and targeting New York City. Deb Feyerick spoke with anchor Don Lemon Sunday night about how the suspect learned how to put the device together.

“Apparently he learned how to build a pipe bomb by reading through Inspire magazine. That is the al Qaeda magazine, an online magazine, which tells interested people how to do these kind of things,” Feyerick reported. “We are told by the source that the man had acquired all the material and was even going so far as to drill holes in a pipe bomb. He was going to use homemade ingredients in order to detonate this device and the device, had he put it together correctly, would, in fact, have worked. We’re being told that he planned to target service men and women returning from Iraq. He also intended on targeting police stations or post offices, and again, this is a pipe bomb and had it gone off, it could have killed close to a dozen people, especially if he attached things like nails. He was following instructions from this al Qaeda-based magazine on this website. We are told that there was an informant who was monitoring this person, who was involved. this is the man who has been on the NYPD radar for about two years.”