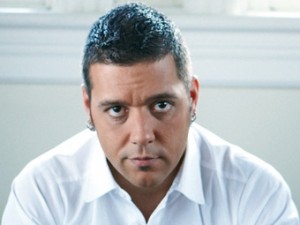 Stroumboulopoulos will continue hosting his CBC show in addition to this as-of-yet-untitled CNN talk show, which will most likely have the word “Stroumboulopoulos” somewhere in the title. The show will tape in Los Angeles before a live audience. The CNN press release announcing the show praises Stroum… the host’s interview style, and provides some insight into what the content of the show will be.

“George Stroumboulopoulos says he doesn’t just ask questions – he creates space for his guests to share their human experiences. His fresh, thought-provoking style fuses big ideas, with art, pop culture, politics, news, sports, and celebrity. Stroumboulopoulos invites his guests to relax and his viewers to rediscover the power of the authentic interview…

“[Stroumboulopoulos] will tape the new program in Los Angeles before a live audience – offering greater access to a diverse group of celebrities, world leaders, and trail-blazing artists. Stroumboulopoulos will feature the public figures driving our cultural conversations and offer a fresh perspective on the interview and talk show format for CNN.”

CNN did not announce what timeslot the show will be getting, but the fact that it’s a Friday night talk show talking politics and pop culture would make it a direct competitor of HBO’s Real Time with Bill Maher, especially considering both channels are owned by Time Warner.