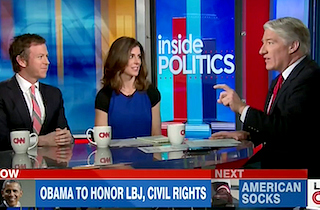 On this morning’s Inside Politics, John King’s daily injection of non-plane coverage into CNN’s New Day, the host premised the conventional-wisdom contrast between Lyndon Johnson, enshrined for his mastery of ball-breaking, arm-twisting wrangling of congressional votes for his historic legislative agenda — like the Civil Rights Act, the fiftieth anniversary of which prompted the discussion — and President Barack Obama, who is commonly thought of as allergic to politicking, hence why he can’t get anything done.

Then the contrast quickly became a comparison. “The Civil Rights thing is interesting because a lot of LBJ’s legacy has been overshadowed by Vietnam, but he did enact sweeping, ambitious domestic agenda,” CNN’s Peter Hamby said. “But before Republicans took over Congress, President Obama did enact one of the biggest pieces of domestic legislation, the Affordable Care Act, in American history. So, you can’t say he’s not completely like LBJ, I guess.”

I guess so. “Affordable Care Act, financial regulatory reform, stimulus,” Bloomberg’s Julianna Goldman listed. “And we have to wonder what LBJ would say about the pen and phone initiative, in terms of getting things done.”

“Wouldn’t we love to know that?” King asked.

This was basically called twenty-four hours ago:

In 30 years, the left will be asking why current Democrats don't get things done like Obama did & the right will say Obama was a Tea Partier

Of course, a more nuanced discussion of the rewards and limitations of this historical analogy could have occurred if Inside Politics were allowed to go on longer than a Descendents song. Alas.