CNN Panel Asks: Is The Key To Winning The Oscar A ‘White Savior’?
video

CNN Panel Asks: Is The Key To Winning The Oscar A ‘White Savior’? 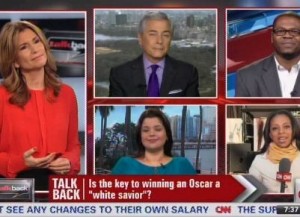 “Is the key to winning the Oscar a ‘white savior’?” Thus was the question CNN’s Carol Costello posed to her panel on Friday — pegged off a Salon article that posited the Academy favors films from the “White Savior” genre, which “features white people single-handedly rescuing people of color from their plight.”

In the piece, David Sirota particularly zoned in on the critically acclaimed Lincoln, drawing the following conclusion:

If you’ve been to the movies in the last half-century, you know the White Savior genre well. It’s the catalog of films that features white people single-handedly rescuing people of color from their plight. These story lines insinuate that people of color have no ability to rescue themselves. This both makes white audiences feel good about themselves by portraying them as benevolent messiahs (rather than hegemonic conquerors), and also depicts people of color as helpless weaklings — all while wrapping such tripe in the cinematic argot of liberation.

So is that the winning formula? CNN’s entertainment correspondent Nischelle Turner said the question of the so-called white savior role in movies has come up, but not so much in the context of whether it helps nab Oscars. It does seem to be the “general consensus,” she added, that it’s easier to get a movie made with such a storyline/character.

She pointed to Django Unchained, and the criticism that it should have received more critical acclaim and recognition. But even in that movie, Costello chimed in, “a white guy got the ball rolling.”

That’s the problem, Politic365’s Jason Johnson asserted: the “prevailing theme” that black people are in “subservient” roles. That they are depicted in ways no one else is depicted.

Turning to Republican strategist Ana Navarro, Costello asked whether a similar case exists with Latinos. Navarro said “we have made strides,” and while there is still “progress to be made,” she has “no idea” what it takes to get the Academy’s votes.

Democratic strategist Robert Zimmerman agreed that it’s “an important topic” with good examples to back up Sirota’s argument. Lincoln, however, is not one of them — because it’s a movie about a “very bold and crafty politician who put together the votes in an all-white Congress and got that amendment through the Congress.”