CNN Panel Backs Incognito: ‘Consenting Adults Should Be Able to Joke About Sodomizing’ Each Other
video

CNN Panel Backs Incognito: ‘Consenting Adults Should Be Able to Joke About Sodomizing’ Each Other 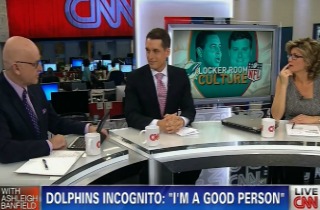 Two legal analysts told CNN anchor Ashleigh Banfield on Monday that the harassment complaints Miami Dolphins player Jonathan Martin has leveled against his teammate, Richie Incognito, are largely meritless. “Consenting adults should be able to joke about sodomizing and hurting each other,” one analyst observed.

Banfield teed up the conversation by playing a clip of Incognito who said that both he and Martin routinely joked with one another with violent or abusive subtext. Incognito said that Martin once sent him a meme of a happy dog and women with the text noting “I will murder your whole f***ing family.”

“This is so ridiculous,” said CNN legal analyst Paul Callan. “When you look at the context of what goes on in professional football locker rooms, this is just typical behavior and it’s gotten blown up because it’s publicized.”

RELATED: Age of Accountability: Cameras, Twitter and Texts Making ‘Getting Away With It’ Impossible

“Did nobody grow up in a neighborhood? Was nobody on a sports team ever?” said CNN legal analyst and defense attorney Danny Cevallos. “Clearly, we need to go back to joke writing 101.”

“The bottom line is here, even if Jonathan Martin wanted to bring some kind of lawsuit, he would have to prove outrageous behavior,” he continued. “This appears to have been between consenting adults.”