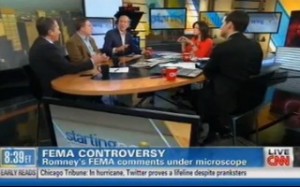 On Wednesday, the Starting Point panel found itself embroiled in an argument over what, exactly, a President Mitt Romney would do with FEMA. Democratic political strategist Richard Socarides argued that FEMA would be “dramatically and drastically cut” under a Romney administration, prompting former New York governor George Pataki to point out that Romney never said he’d “do away” with FEMA altogether.

Host Soledad O’Brien — after first warning the panel that she’d “get on this table” in an effort to quiet their arguing — consulted the transcript of Romney’s exact statement to see what he’d actually said: “Every time you have the occasion to take something from the federal government and send it back to the states, that’s the right direction.” That, she said, is what Romney had told her colleague John King, later adding that “You can go even further. Send it back to the private sector; that’s even better. (“I’m not sure what he means by that,” O’Brien added.) Instead of thinking, in the federal budget, ‘What should we keep, what should we cut?,’ we should ask the opposite question: ‘What should we keep?'” Romney was then asked whether that included disaster relief, to which Romney responded that “We cannot afford to do those things without jeopardizing the future for our kids. It is simply immoral, in my view, for us to continue to rack up larger and larger debts and pass them on to our kids, knowing full well we’ll be all dead and gone before it’s paid off. It makes no sense at all.”

Socarides maintained that Romney would advocate for dramatically cutting FEMA, with O’Brien saying that it “seemed” like Romney was indeed arguing in favor of cuts.

Pataki, meanwhile, argued that Romney would not cut FEMA altogether, but would advocate for giving more power to the states.