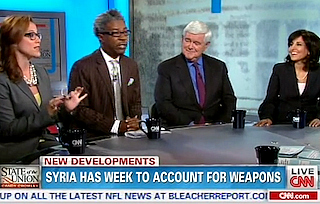 On State of the Union Sunday morning, a panel battled over the significance of the recently-brokered deal with Russia and Syria to capture and destroy Syria’s chemical weapons, with CNN contributor S. E. Cupp alleging that Hezbollah might have chemical weapons, drawing a chorus of rebukes from the panel.

“In the end the president’s actually getting what he wants,” Cornell Belcher started. “Like he said, ‘I didn’t run for office to get us more involved in wars, I ran to get us out of wars.’ In the end, we’re not going to be dropping bombs over there.”

“I can’t believe how naive that sounds,” Cupp said. “There’s so much more at stake than the president’s legacy. There’s obviously what’s going on in the ground in Syria, Iran, North Korea, our other enemies that are watching what we do, watching this confusion, this lack of clarity, this spinelessness on red lines that don’t get met.”

“The whole point of going in and having these limited strikes, I was told, was to punish Assad for those chemical weapons strikes,” Cupp continued. “Now we’re willing to say, ‘Well, Russia’s on it, we don’t need to punish them anymore, let’s get rid of the chemical weapons.’ I’m sorry, no one believes that is possible. They’ve been moving chemical weapons. Hezbollah probably has them already. This is a farce. It’s Kabuki theater. We’re all in for a very rude awakening.”

“With all due respect, I actually think that those statements are naive,” Neera Tanden said. “I think the idea that you’re just going to say that Hezbollah has chemical weapons is kind of outrageous. Nobody says that. None of—if Hezbollah had chemical weapons, Israel would be acting.”

Tanden argued that the United States had successfully achieved its goal of eliminating chemical weapons from Assad’s arsenal, but added, “What’s depressing is, instead of seeing this as an achievement for our national security interests, conservatives are looking at another way to score points against the president.”

“What is the achievement?” Cupp replied. “Nothing’s happened!”