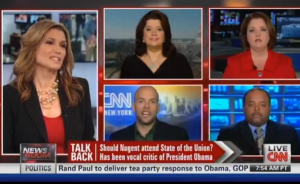 “Should Ted Nugent attend the State of the Union?” Such was the question that spurred Carol Costello‘s panel on CNN this morning to get a little heated. While Nugent may have the right to be there, more than one panelist didn’t think it was the best idea.

“Ted Nugent, Carol, is a brand,” radio host and comedian Pete Dominick asserted. “Just like Donald Trump is a brand. What they do is they say crazy, ridiculous, provocative things, so that we’ll talk about them, and so that they remain relevant and they can sell tickets to their, in his case, concerts.”

Nugent, he added, knows nothing about economic policies “much less math,” but he’s simply entertainment. He wants to “stay relevant.” It’s “called freedom of speech,” Republican strategist Ana Navarro asserted. And that means that freedom applies to everyone.

Nugent is also opening himself up to reporters after the president’s address, Costello noted, asking, “why inject yourself like that in the debate when you’re not going to further it?”

“Because we’ve actually pulled him into this with this big debate over gun control,” Kremer replied, adding that he’s passionate about the issue.

That spurred all five to start talking over each other, until Navarro went back to reiterate her earlier point. The question isn’t why Nugent is speaking to the press, she said. The “legitimate question is, ‘Why is the press asking Ted Nugent questions?'”

(…during a panel on a news channel about Nugent.)