CNN Guest Claims, ‘We Can Learn From’ Chris Dorner About Guns, ‘Institutionalized Racism’ 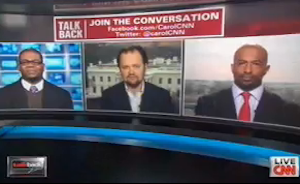 On Wednesday morning, Carol Costello‘s panel on CNN tackled the question of whether ex-LAPD officer and murder suspect Chris Dorner, who was the center of a manhunt in California, can “teach” us anything about gun violence. The panel quickly turned into a two-against-one discussion, with the majority not humoring Dorner’s manifesto.

Costello noted that given how “vile and evil” Dorner has been, it’s easy to dismiss any message he may be conveying.

“Crazy people” can make good points “in the course of coming to evil conclusions,” the New York Times‘ Ross Douthat argued. But there’s a double standard, he argued, contrasting this conversation with the one that took place after Gabby Giffords was shot. Then, even though the shooter had “no political motivations whatsoever, there was this immediate discussion of how this was an indictment of the Tea Party,” etc.

Now you have a psychotic killer who has published a manifesto that expresses basically left-wing ideas and the takeaway is supposed to be that we should enact left-wing policy proposals? It seems like there’s a slight double standard in how the media reacts to these kind of rampages, don’t you think?

Agreeing with him, Costello turned to Van Jones, who wasn’t pleased to be having such a conversation about Dorner.

“There are many better spokespersons for the cause of racial justice than this murderer,” Jones contended, noting that we’re going “down a very dangerous road.” The victims are the ones who “deserve to be talked about,” he added, and “the legitimate people who have been trying to make positive change in peaceful, lawful ways.”

Dorner isn’t “the Rosa Parks of gun violence,” Johnson countered. But “his story is telling and the kind of thing we can learn from — it doesn’t have to be an either/or.”

Looking into the issues such as mental health is fine — in terms of motivations — Jones argued, but “I don’t want to validate his political thinking while people are literally planning funerals.”

Douthat agreed, leaving Johnson on his own with this argument.

“In these kind of moments,” Douthat said, “you know, you want to focus on the victims, you want to condemn the crime, and you want to save the political points the person may have been inspired by for a more appropriate time.”