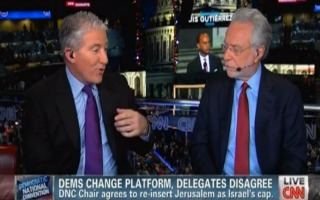 The Democratic National Convention was marred on Wednesday by a revolt among the delegates as former Ohio Gov. Ted Strickland attempted to reintroduce language omitted from the first draft of the party’s governing platform that expressed support for God and Israel’s disputed capital of Jerusalem. This moment of discord will be exploited by the Republican party, if only because it exposes a gap between the views of a majority of Americans and the base of the Democratic party.

Hoping to address the snowballing scandal surrounding the omission of language supporting Jerusalem from the party’s platform, Gov. Strickland introduced an amendment to the platform that would address the omission.

Requiring a two thirds majority to adopt the proposed amendments to the platform, Los Angeles Mayor Antonio Villaraigosa called for a voice vote.

After two inconclusive votes, confusion was palpable. Villaraigosa stood a moment in stunned silence as the clamor from disgruntled delegates on the floor grew. “I guess…,” said Villaraigosa, his voice trailing off as he looked over his shoulder at a visibly confused Strickland.

Villaraigosa called a third and final voice vote which resulted in a similar stalemate. Rather than call the role, however, Villaraigosa determined that those in support of the proposed platform amendments had won. Loud “boos” erupted from the hall as the amendments were adopted.

“It’s embarrassing,” said CNN’s John King when asked for his opinion on the lack of consensus among the DNC delegates. “It took, what, three times, and even then – listening from up here – it’s hard to say that was two thirds. But he just decided enough was enough.”

King says that reporters still do not know why, and no one has told them how, it was decided that the DNC platform committee would omit language that referred to God as well as to Jerusalem being the capital of Israel. He said that Congressional Democrats panicked yesterday, knowing that Romney would make an issue of the platform in swing states with a large Jewish population like Florida.

“That was embarrassing,” King concluded.

Wolf Blitzer turned to Dana Bash, who said that, in her opinion, “the noes had it.”

She said that members of the Democratic party in Congress were inundated with emails from constituents who regarded the Jerusalem issue as a major problem. She went on to say that she believes the platform has not reinstated language from past platforms that name Israel as “the United States’ closest ally in the Middle East.”

The GOP will pounce on this moment. They will have a field day with the God issue, but those most receptive to attacks on Democrats for omitting God in the party’s platform are likely to already be Republican supporters. Worse for Democrats will be the Republican effort to tie President Obama’s party to the revolt over Jerusalem. This episode showcases how deeply suspicious the Democratic party’s rank and file are of any Israeli claims on territory gained after 1968, including portions of East Jerusalem where the Western Wall stands.

The American Jewish vote, a small but loyally Democratic constituency, signaled their frustration with the Democratic party when – in a special election to replace Rep. Anthony Weiner in 2011 — a heavily Jewish district in Queens, New York, sent a Republican to Congress for the first time since the 1920s.

It would seem that shot across the bow has registered only with the Democratic party’s leadership, but has not yet percolated down to the party’s grassroots supporters. The Republicans use this moment to showcase how far the Democratic party’s interests have stayed from those of the once-loyal pro-Israel Jewish community.

UPDATE: According to reports, President Obama pushed for the platform to reintroduce language from earlier Democratic platforms about Jerusalem and God. If nothing else, the Republican party now has an effective counter to the argument that Mitt Romney is tied to the more controversial aspects of his party’s governing platform.