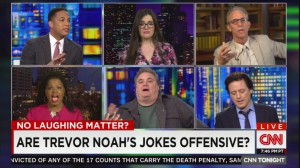 CNN tonight convened a panel to discuss Trevor Noah‘s controversial Twitter jokes, now that he’s the heir apparent to The Daily Show. But the whole thing just devolved into a giant shouting match over one panelist’s comments about Noah’s provocative jokes.

Oh, and Artie Lange was one of the panelists. Need I say more?

Well, I probably should. Wendy Todd told Don Lemon she’s offended by how Noah is “perpetuating stereotypes” about African-Americans in many of his jokes. At a time when “we’re being shot in the street,” she said, it’s “upsetting” and “irresponsible” for Noah to be saying such things.

She also complained a bit about how he’s a foreigner coming to America to make fun of Americans.

No one else on the panel was on her side. Natalie Shure defended Noah’s tweets, Jay Thomas basically called Twitter the death of comedy when compared to provocative TV humor, and both Lange and John Fugelsang weren’t too thrilled about Todd playing the part of the humor police.

Lange pointed to comics like Richard Pryor who joked about black stereotypes, arguing that Noah’s comedy doesn’t devalue African-Americans.” Todd shot back that “that’s not for you to decide” and said she’s outraged that Noah is being “rewarded” for making fun of African-Americans.

Fugelsang said the idea of bringing up stereotypes in comedy is to mock it, not perpetuate it, and Lange snarked, “Tweet out a list of jokes we’re allowed to say.”