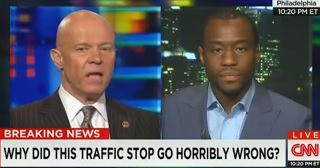 Calling Bland “arrogant from the very beginning,” and saying she should have deferred to the officer, Houck drew the ire of fellow panelists Marc Lamont Hill and Sunny Hostin, who both objected to the former police officer’s characterization of the woman and were clearly taken aback that he asserted the officer did not overreact in this case.

The newly-released dashcam video shows Officer Brian Encinia aggressively arguing with Bland — who is forcefully asserted her rights as someone who hadn’t technically been arrested yet. Houck seemed to think that while the other panelists felt the cop was “baiting” Bland when he started yelling at her to butt out her cigarette, Bland was ready to pick a fight as soon as she was pulled over and had no intention of cooperating:

“Even if [the officer] de-escalated that whole situation,” Houck declared, “she would have kept coming at that officer the way she did.”

Houck uses the word “arrogant” several times throughout the conversation, which Hill defended as Bland asserting her own “dignity” as a person with rights during an arrest that hadn’t actually taken place yet. By the end of the conversation, when asked if this was even a racial issue, Houck denied it was, with Hill responding sarcastically: “…because this happens to white women all the time.”

Here is the entire conversation: