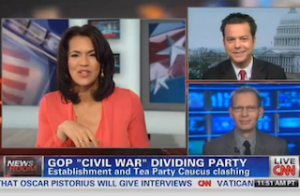 CNN’s Fredricka Whitfield brought together commentators from both wings of the modern GOP Saturday to discuss the growing Republican civil war.

Newsweek/Daily Beast’s John Avlon, who has worked for Rudy Giuliani and written books about the “wingnut fringe” blamed the current “factional fight” squarely on “disastrous 2012 election.” He added, “the enormous amount of outside money fueling these various factions and a deep philosophical division between more libertarian-minded folks, some center-right folks and social conservatives. There’s some fundamental contradictions that need to get worked out.”

Meanwhile FreedomWorks president Matt Kibbe, a prominent Tea Party voice, argued that too much attention is being paid to the supposed “civil war.” I think it’s a broader paradigm shift,” Kibbe said. “I think you have people all over the country becoming more informed, who have better access to information, are able to organize out of the duopoly party structure. That’s the fight now between the insiders like Karl Rove and all of these grassroots citizens that feel like they’re the ones that should decide who the candidate is that runs in a general election.”

Unsurprisingly, Kibbe characterized the issue as one of “freedom,” in which no “single person, FreedomWorks or Karl Rove or the Republican Party” should “dictate from the top down how this is going to work out.”

Avlon brought the discussion to a more specific place, pointing to the failed candidacies of people like Christine O’Donnell in 2010 or Todd Akin in 2012, Tea Party insurgents who essentially lost what should have been winnable seats for the GOP. He asked Kibbe directly, “What’s the take away for an organization like yours which has funded primaries in Republican primaries putting forward some candidates who are just disasters in a general election?”

Kibbe acknowledged there have been “Tea Party failures” but quickly equated those to Karl Rove‘s failures from 2012, including several races in which Rove’s super PAC poured in millions and the candidates still lost.

Avlon got the last word, saying “the big irony here is that Karl Rove pioneered a lot of the play-to-the-base red state, blue state strategies. But folks are starting to realize there is such a thing as too extreme and the Tea Party is struggling with whether that is a problem or not.”