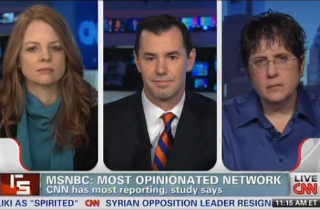 CNN’s Reliable Sources panel this morning took on the recent Pew study that found MSNBC to be 85% opinion, Fox News 55% opinion, and CNN at 46%. After expressing concerns as to what exactly the survey defined as “opinion” content versus hard “reporting, the panel ultimately concluded that opinion content is “cheapest” to produce, and thus advantageous for ratings.

“It’s a lot cheaper to be spout off and be a gasbag than it is to actually report anything,” TVNewser’s Gail Shister said. “The thing that gave me pause about the study — and I have great respect for Pew — is how they differentiated between reporting, because you can argue that reporting forms opinion and where do you draw the line? I wasn’t sure it was in the content analysis that they did for the study. Dubious about what was opinion, what was news.”

Mediaite contributor Joe Concha, however, thought the study to be entirely accurate, reiterating the claims of his recent column: that MSNBC should embrace, rather than deny, its unabashed opinion-based content.

He went on to slam MSNBC primetime star Rachel Maddow for claiming to not be just an opinion show: “She’s a brilliant woman. That is a profoundly stupid thing to say to anybody who is paying attention. If you watch Rachel Maddow’s show, that is clearly an opinion-based show.”

Hollywood Reporter‘s Marisa Guthrie noted her own surprise at the “vast difference” in opinion percentages between MSNBC and Fox, before siding with Shister over her skepticism of the study’s definition of “news” versus “opinion.”

“I think MSNBC has taken this sort of preaching-to-the-choir news and made and formed a whole business model around it,” Guthrie continued. “And that is partly in their effort to be sort of the counterpoint to Fox News. And, you know, the Fox News opinions are so loud in primetime that I think they do overshadow a lot of what goes on on the network during the afternoon. I mean, Chris Wallace, still, I think, really one of the, you know, very independent voices.”

“As opposed to Chris Matthews, who is very quiet,” Shister deadpanned. “His opinions are very quiet.”

“He’s a soft-spoken fellow,” Kurtz joined in on the mockery of the MSNBC host.

The panel also cautioned against MSNBC president Phil Griffin‘s prediction that his network will be in first place by next year, suggesting that the network chief will likely regret making such a bold statement.