CNN Panel Trashes Boehner: ‘At Least Gingrich Was in Charge of His Caucus’
VIDEO

CNN Panel Trashes Boehner: ‘At Least Gingrich Was in Charge of His Caucus’ 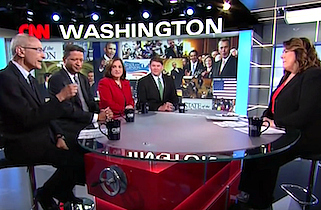 “If you go back to ’95 and ’96, the last government shutdown—which knocked half a point off the GDP in the United States—at least [Newt] Gingrich was in charge of his caucus,” said former Bill Clinton Chief of Staff John Podesta. “Now it appears that Heritage Action and Ted Cruz and the Koch brothers are running the Republican House caucus. It is amazing the weakness that the leadership has shown in not staring these guys down.”

“It’s amazing how terrified you are of a guy who that ran for the Senate on saying he was going to do actually what he said he was going to do,” Ben Ferguson said. “Ted Cruz did not come to Washington, D.C. to make friends with John McCain and Lindsey Graham or with John Boehner.”

“Personalities will come and go,” Artur Davis said. “What’s missing in the Republican Party right now is someone who’s a credible national figure, who’s not just a columnist or a pundit like some of us, who can actually step forward and provide a different vision of conservatism than the one that Ted Cruz believes in…That reform vision is missing on the national stage, and that ought to be the counter to Cruz.”

“I don’t find Ted Cruz scary,” Washington Post columnist Ruth Marcus said. “What I find scary is the notion that he is in charge of the House of Representatives…What is scary isn’t the presence of Cruz. What’s scary is the absence of Boehner, the absence of strong Republican leadership who can call the bluff of this fairly small faction of House Republicans.”