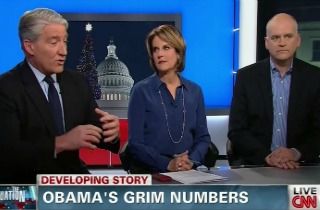 A panel of political guests joined CNN anchor Wolf Blitzer on Tuesday to dig into recent polls showing President Barack Obama’s job approval slipping in the last two months. The panel guests unloaded on the president, with CNN correspondent John King observing that Obama is “0 for 13” in recent accomplishments which has depressed his base. The network’s political analyst Gloria Borger observed that the president has been on a “downhill” slide since his January.

Blitzer cited a recent Washington Post poll which showed an 18 point swing away from Obama and toward congressional Republicans on the issue of who Americans trust to handle the nation’s economy.

“It’s crazy how this has switched, even given the fact that the republicans blew the government shutdown in October and you would think the president might still be riding on that, but he’s not,” Borger observed. She added that voters do not believe Obama is as “competent” or “trustworthy” as the once believed.

King added that Obama’s problems run deeper than just the Affordable Care Act’s roll-out. “Go back to the State of the Union at the beginning of the year; he’s 0 for 2013,” King said, noting that every policy proposal Obama backed in January he has failed to achieve.

National Journal Editorial Director Ron Fournier observed that, as he recently wrote, there are eerie similarities between Obama and George W. Bush “over-reading their mandate.”

Borger added that Obama enjoyed a victory over Republicans during the fight over the “fiscal cliff” in January, but “it’s been downhill” for the president ever since.