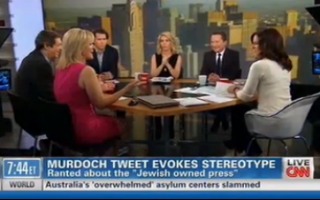 On Saturday, Murdoch had asked, via Twitter, “Why Is Jewish owned press so consistently anti- Israel in every crisis?” Murdoch would later apologize for this comment.

RELATED: Rupert Murdoch Tweets: Why Is The ‘Jewish Owned’ Media ‘So Consistently Anti-Israel?’

“In the beginning part,” said Dana Bash, “he talks about Jewish owned media. As you said, that’s like, come on, give us something that’s not 100 years for thousands of years old and just flat wrong. But, just to sort of lay out the elephant in the room and talk about it, I think part of the second part talking about anti-Israel is that that is where his corporation and specifically talking about the television network, Fox, tries to position itself. Tries to position itself as a place where people who are pro-Israel go.”

“When Murdoch spouts off and these are his personal views and he’s 81 and he’s the corporate chief and no one’s going to tell him not to,” said Howard Kurtz, “it does reflect badly, I think, on Fox News. And in addition to that, the reason that semi-apology doesn’t work, he then had to write a letter to the Anti-Defamation League to do the full grovel because there was enough heat to make Murdoch realize that he had to walk it back.”

“I mean, don’t you think this is all part of the marketing, though, of Fox, and part of, how they get attention?” asked Richard Socarides. “And I mean, you guys follow this; this is your business. I mean it seems to me that this is part of Fox marketing.”

The panel could not, ultimately, reach a consensus about whether it was a deliberate, Machiavellian move on Murdoch’s part, or “your kind of crazy uncle, firing off.”