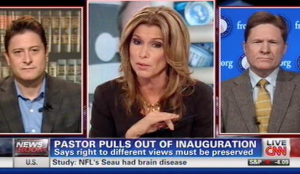 After the pastor who was supposed to deliver the benediction at President Obama‘s inauguration withdrew from the ceremony — due to past remarks about homosexuality that surfaced — a CNN panel, with host Carol Costello, debated whether the move was necessary. Taking opposing sides, the guests weighed the relevance of Rev. Louie Giglio‘s views on his participation in the ceremony.

RELATED: Pastor Withdraws From Obama Inauguration Due To Anti-Gay Remarks From Past Sermon

There are plenty of pastors who take a more progressive, “pro-gay” approach, argued Wayne Besen, a gay rights advocate and executive director of Truth Wins Out. Obama could have chosen an inclusive pastor, he added, noting that Giglio’s participation “would have cast a huge shadow over the entire inauguration with his mean-spirited message against gay people and Americans are no longer putting up with it.”

None of the quotes from the Giglio sermon in question “are at all out of the mainstream of Christian orthodoxy or contemporary Evangelical thought,” Peter Sprigg of the Family Research Council argued. “If he’s to be blacklisted for the opinions that he’s expressed, then you are essentially blacklisting all Evangelicals, all Bible-believing Christians, all Roman Catholics believe in the teachings of their church. I think that’s a shocking position to take.”

Besen wasn’t buying it, countering that had remarks bashing any other minority have been uncovered, there would have been no question about Giglio’s not partaking in the inauguration. The world we live in is increasingly marked by “intolerance in the name of tolerance,” Sprigg asserted. “It’s downright Orwellian.” That spurred Besen to challenge Sprigg’s embracing diversity given that he “called for the imprisonment of gay people…and suddenly you’re for tolerance?”

This is “not about me,” Sprigg replied, as Costello interjected to say that Besen’s point was right. She went on to ask him about polling that suggests majority of Americans are okay with same-sex marriage.

“When you focus on the real issue, which is…sexual conduct, they do not approve of the sexual conduct,” Sprigg argued. “If you frame it in a biased way in terms of rights and so forth, it tilts the results of the poll.”