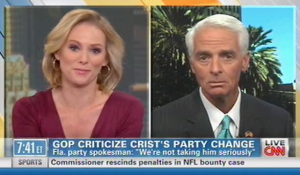 Former Florida Gov. Charlie Crist has been outspoken about his switch from Republican to Independent to Democrat. On Wednesday’s Starting Point, Soledad O’Brien listed his positions on a variety of issues, asking him to explain. One of the panelists, however, questioned Crist’s motivations.

As he’s reiterated before, Crist said the GOP left him, not vice versa. “Let me read some of your own quotes back to you,” O’Brien said. “‘It’s hard to be more conservative than I am on the issues.’ This is back on 2009. ‘I’m pro-life. I’m pro-gun. I’m pro-family, I’m anti-tax.’ Are you saying that you’ve changed on those four specific things?”

Crist said that’s not the case. “I’m pro life, but I don’t believe in imposing my will on other people,” he said. “I believe people should support and protect the second amendment. I believe raising taxes isn’t something anybody really wants to do.”

As for the fiscal cliff, Crist said he’s “anti-tax,” but not “anti-common sense.”

“You know, what you are saying sounds great,” Margaret Hoover chimed in, “but there are Republicans who would say this sounds a lot like political opportunism at the expense of principle. That you became an independent when you aren’t going to get the nomination for Senate against Marco Rubio and now you’re becoming a Democrat because there is no political future for you in Florida as anything else.”

“In order to be true to myself, I have to do what I think is right for my heart,” he replied. “And what’s right for me is to pursue the things I believe in.”

“You’ve changed on multiple positions, and it seems as though that is political opportunism rather than the party having left you,” Hoover pressed. At that point, fellow panelist Deepak Chopra asked whether it’s not okay to change sometimes.

“Sometimes it is okay,” she said. “We see this all the time, but with Gov. Crist, Republicans would suggest we have seen not a natural evolution, but one that is sheer political calculation.”