CNN Panelist James Rubin: ‘Terry Jones Is A Warrior’ Just As Much As ‘The Preacher In Libya’ Shouting To A Mob
Video

CNN Panelist James Rubin: ‘Terry Jones Is A Warrior’ Just As Much As ‘The Preacher In Libya’ Shouting To A Mob 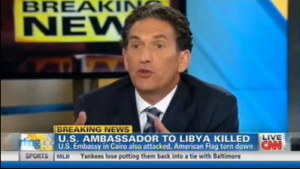 James Rubin — counselor to New York governor Andrew Cuomo — appeared on Starting Point‘s panel Wednesday morning, where he shared his take on the U.S. government’s response to violent protests on the American embassy in Cairo.

He also noted that we have religious, cultural “warriors” within our own borders:

Look, my guess is what happened is that information started being passed around that an Islamic extremist group inside Egypt was circulating this video, was stirring the pot, was showing it to TV stations, was asking the U.S. Embassy for comment. “What’s your view of this video? How come you, be the U.S. government, didn’t stop them from making this?” — the way they imagined we could, because they’re not sophisticated. And so an embassy official said we’ve got to figure out a way to disassociate the United States from this video.

This wasn’t the first time. We had, as we mentioned earlier, the Terry Jones incident, where a burning of the Koran was used in Afghanistan in the same way to start trouble. You say there’s a war; there’s two sets of warriors. Terry Jones is a warrior. He is trying to create a civilizational war just as much as the preacher in Libya or the preacher in Egypt who is shouting at his mob on the street. He’s a warrior. But Terry Jones is a warrior, too. When you burn a Koran or make a movie that is designed and intended to offend, you’re a warrior. So how do we deal with these warriors? I don’t suspect they got the nuances right.