CNN Panelist On Obama’s Talk Show Appearances: ‘Gives Fox [News] Opportunity To Come Down On Him’ 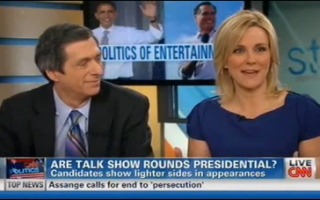 Daily Beast columnist Lauren Ashburn thought these type of interviews provided a way of holding the candidates accountable “through their character,” as well as a means of allowing people to decide if they essentially want to welcome these people into their living rooms for the next four years.

Daily Beast Washington Bureau Chief and CNN host Howard Kurtz said that he, for one, is “tired of these stuffed shirt journalism prognosticators looking down their nose at these programs. This is where the pop culture is. Candidates who want to be elected president have to play in that culture and to reach people who aren’t watching CNN all day or tuning into Sunday morning shows.”

Host John Berman then played a clip of David Letterman making a joke to Obama about his naked body and asked whether this was the best possible situation for which the President to have put himself. Ashburn saw it as a test, of sorts. If you can’t have a back-and-forth with a comedian, she said, you “don’t have any business being the president.”

Kurtz then pointed out that the more “serious” media sources are culpable in promoting the “silly” aspect of these interviews because they’ll focus on, say, the nude comment or Romney’s comments about Snooki rather than the more substantive answers given. The panel also gave talk show hosts like Letterman and Leno credit for asking tougher questions of their political guests.

Ashburn then said that appearing on talk shows is no excuse for not meeting with world leaders and fulfilling other presidential duties — particularly when not doing so gives Fox News ammunition against you.